The Energy Transparency Award (ETA) is an annual competition that recognises a company or institution for their particular contribution to the transparency of energy markets in Europe.

The winner of the 2011 award was announced on 9th November 2011 at an award ceremony dinner organised by  the Florence School of Regulation (FSR) in Brussels. CEER won the award for its contribution to the conception and implementation of a Transparency Regulation at European scale, notably:

CEER was nominated (by a third party) for its work on a protocol for an EU-wide energy trade reporting and monitoring scheme which could safeguard market integrity and help prevent market abuse. According to the Selection Committee, "The CEER Pilot Project Energy Trade Data Reporting Scheme demonstrated within a period of only six months that the establishment of an effective European monitoring of wholesale energy trading based on a largely electronic data collection will be challenging, but is feasible. It served as a prototype for the implementation of the Regulation on Energy Market Integrity and Transparency and hence it contributed to persuade EU legislators about the possibility and usefulness of more systemic and sophisticated EU-wide market monitoring."

The pro-active role of energy regulators along the whole legislative process
The Steering Committee further praised CEER for having "initiated a close and productive dialogue with financial market regulators many years ago aimed at providing comprehensive and coherent supervision and regulation of all energy markets, physical and financial. Moreover, the CEER has always asked the European Institutions to set up appropriate EU wide market and price monitoring mechanisms."

Click here to read the Decision of the ETA selection Committee 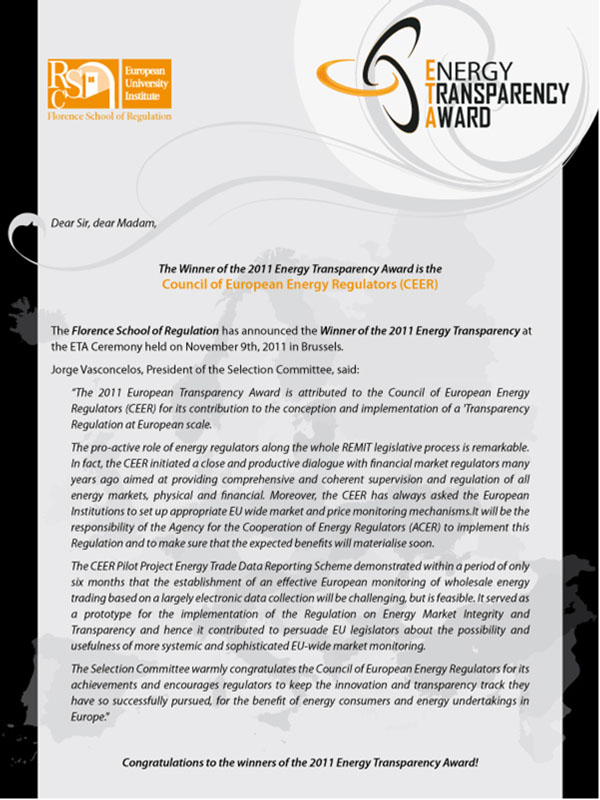