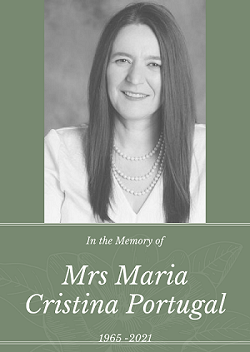 It is with great sadness that CEER announces the sudden passing of Mrs Maria Cristina Portugal, President of the ERSE (Portugal) Board of Directors and member of the CEER General Assembly, during the early hours of 8 September 2021.

Mrs Portugal chaired the ERSE Board of Directors from May 2017, having previously served as a member of the ERSE Board, and as President of ERSE’s Tariffs Council for 15 years. She also served as one of two members of the CEER General Assembly from ERSE for some years.

CEER offers its sincerest condolences to her family and to all of our colleagues in ERSE. Her contribution to CEER and the European energy sector will be greatly missed.

The General Assembly meets circa 9 times per year.