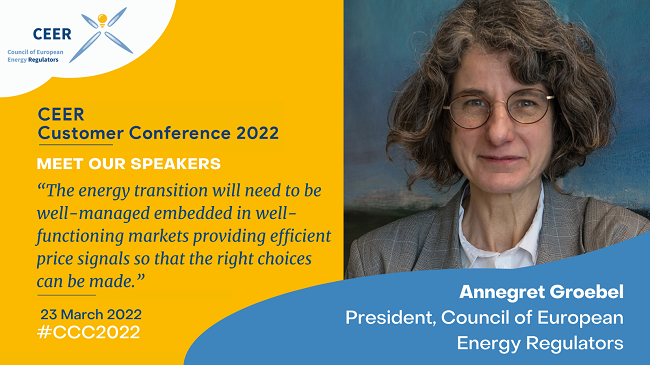 Dr Annegret Groebel is Director of International Relations at the German Regulatory Authority for Electricity, Gas, Telecommunications, Post and Railway (BNetzA). Dr Groebel has worked for BNetzA since 1998. She has been CEER President since January 2019 and was a Vice President of CEER since 2012. She also has chaired the CEER Market Integrity and Transparency (MIT) Working Group since 2013. She is a member of the Board of Regulators of the Agency for the Cooperation of Energy Regulators (ACER). Dr Groebel has a Ph.D in Economics from the University of Mannheim. She is also involved in the work of the Independent Regulators Group (IRG) and the Body of European Regulators for Electronic Communications (BEREC). 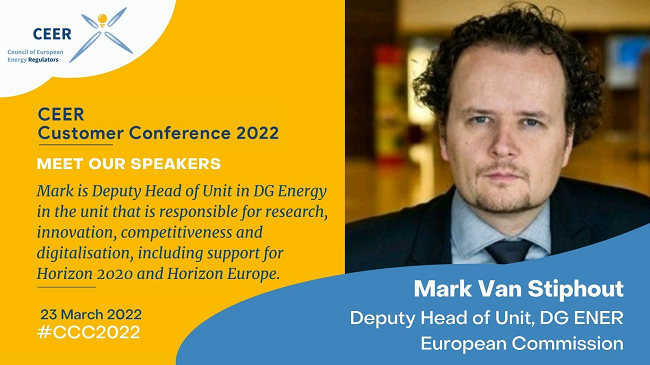 Mark van Stiphout is currently Deputy Head of Unit in DG Energy in the unit that is responsible for Research, Innovation, Competitiveness and Digitalisation, including support for energy research and innovation in Horizon 2020 and Horizon Europe, and the Energy Union Competitiveness Progress Report.

Until the 1st of November 2014 he was a member of the Cabinet of the Commissioner for Energy, Günther H. Oettinger, who he advised on nuclear energy and energy research, as well as smart grids, retail markets and the relations with Russia. This included for example the Commission's work on nuclear safety and the trilateral negotiations with Russia and Ukraine on gas supply.

Before that he was assistant to the Director-General for Energy, and from 2006 to 2010 he was responsible for the liberalisation of the internal market for natural gas as Policy Officer in DG Energy in the Electricity and Gas Unit.

Previous roles include consultancy on renewable energy projects at Ecofys and market analyst at Cogas Energie. 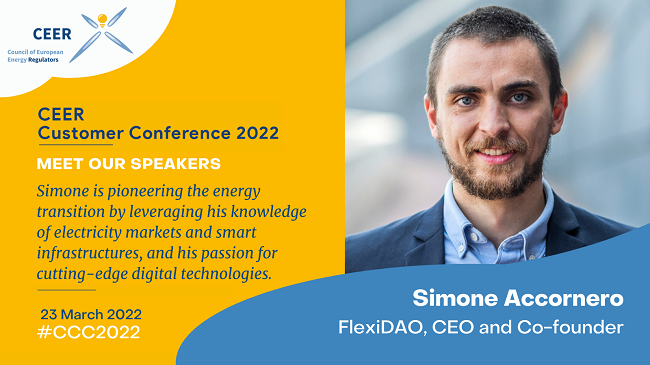 FlexiDAO CEO & Co-founder. Simone has a wealth of experience as a cleantech entrepreneur, energy management consultant, and research engineer. Recipient of the EIT EU 2018 CHANGE Award and holder of a double MSc at KU Leuven and Universitat Politecnica de Catalunya. Simone is pioneering the energy transition by leveraging his deep knowledge of electricity markets, smart infrastructures, and his deep passion for cutting-edge digital technologies. 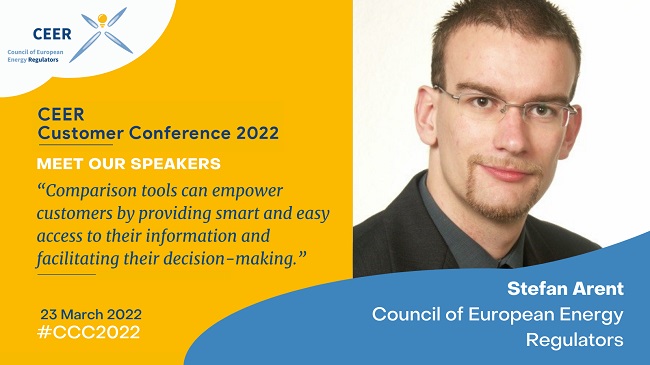 Stefan Arent holds a PhD in Economics and worked four years as economic consultant at the ifo Institute before joining the German regulator in 2013. He joined BNetzA within the unit responsible for incentive regulation and benchmarking. From 2015 on he is deputy head of the unit for international coordination in energy. His focus is on consumer issues and retail markets. In this position he also co-chairs the Consumer Empowerment Work Stream at the Council of European Energy Regulators (CEER) and is member of the Consumer and Retail market Working Group. 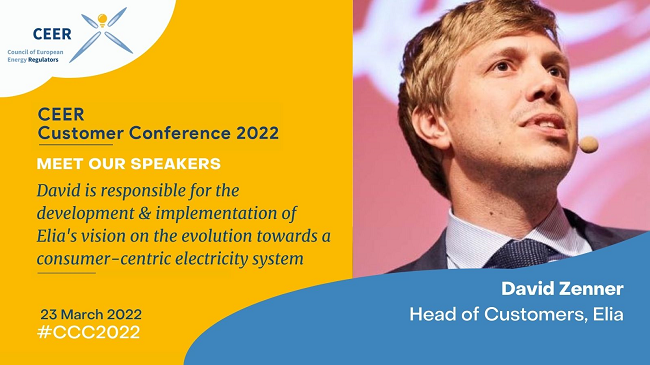 David Zenner (°1979) joined ELIA in 2003. As Head of Customers, he is responsible for the customer relations of the company and the creation of the necessary building blocks to evolve to a consumer-centric electricity system such as an upgraded market design, easy data access and setting up an ecosystem to facilitate the creation of “Energy-as-a-Service” business models. He was previously responsible for the activities related to operations and maintenance of the grid in different areas of Belgium.

David graduated in electromechanical engineering at Ghent University in 2002 and holds a Master of Electrical Engineering from the Ecole Polytechnique Fédérale de Lausanne (EPFL). 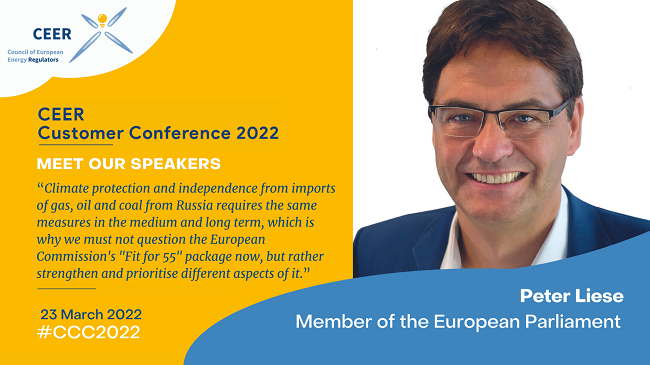 Medical Studies in Marburg, Aachen and Bonn. Attained his PhD from the Human Genetics Institute of the University Bonn. Occupation as doctor in Guatemala. Ward physician in the children’s hospital in Paderborn, Germany (till 1994). Physician in a group practice (1994 - 2002). District Chairman of the Junge Union (1991-1997). Member of the Council of the Municipal Bestwig (1989-1994). Member of the Central Committee of German Catholics (since 1997). Member of the federal executive Board of the CDU. Member of the European Parliament for the region Südwestfalen (South Westphalia) since 1994. 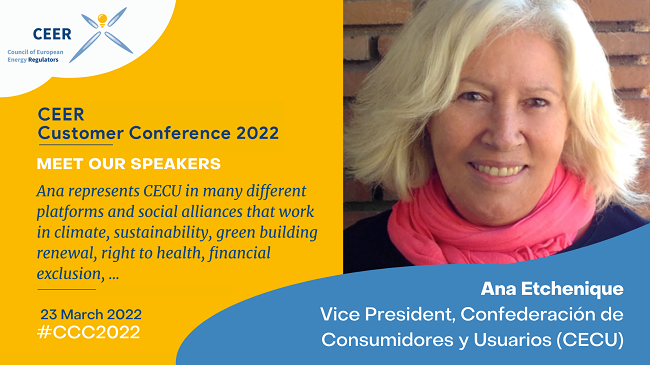 Ana Etchenique joined CECU in 2000 and represents CECU in many different platforms and social alliances that work in climate, sustainability, green building renewal, right to health, financial exclusion, and others. 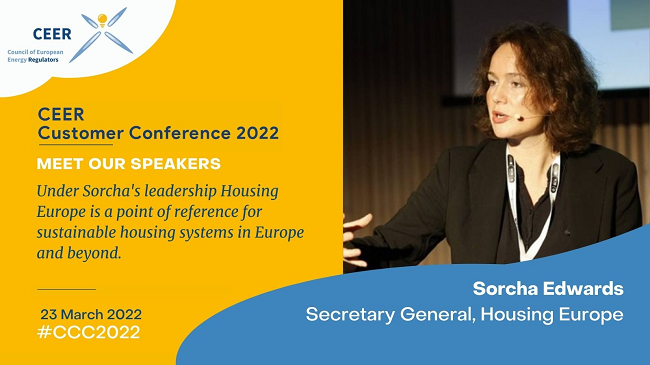 Sorcha has been General Secretary of Housing of Europe, the European Federation of Public, Cooperative and Social Housing since 2014. Housing Europe brings together public, cooperative and social housing providers from across Europe. They share a vision of a Europe which provides access to decent and affordable housing for all in communities which are socially, economically and environmentally sustainable and where everyone is enabled to reach their full potential. The sector manages 25 million homes and delivers over 200,000 new homes and renovations annually. Sorcha leads the team and coordinates the network for maximum impact aiming at better regulation, better knowledge and better finance for housing. Under her leadership Housing Europe is a point of reference for sustainable housing systems in Europe and beyond. 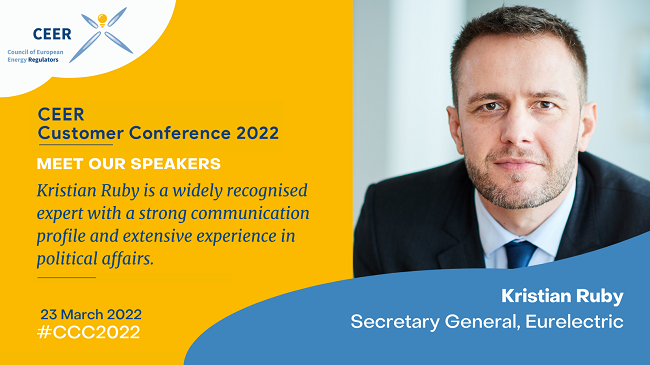 Kristian Ruby is a widely recognised expert with a strong communication profile and extensive experience in political affairs. He joined Eurelectric from Wind Europe, where he served as Chief Policy Officer and was in charge of development and implementation of the political strategy.

Prior to this, Ruby worked as a journalist and served seven years as a public servant in the Danish Ministries of Environment, and Climate and Energy and in the European Commission in the cabinet of the former Climate Action chief, Connie Hedegaard.

Kristian holds a master degree in history and international development. 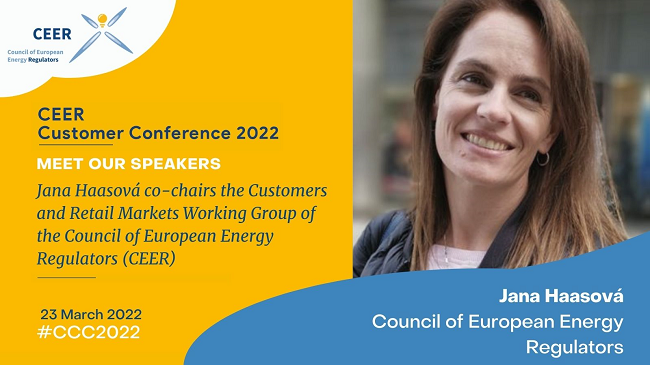 Since joining the Energy Regulatory Office (ERO) in autumn 2015, Ms. Haasová was responsible for various international dossiers, strategy, innovations in the energy sector and first and foremost consumer protection issues.

In February 2018, she became Co-Chair of IRM WS. During this period, she took part in drafting numerous reports, whitepapers and recommendations for EU energy community. Since early 2020, she is also representing ERO at the CEER General Assembly and ACER Board of Regulators. Jana co-chairs the CEER Customers and Retail Markets Working Group, and also co-chairs the Agency for the Cooperation of Energy Regulators (ACER) Retail Working Group, established in 2021.

Prior to working at ERO, she held a position in Czech DSO, media and transport sectors. Ms. Haasová has a degree at the University of Economics in Prague in International trade and Business law. 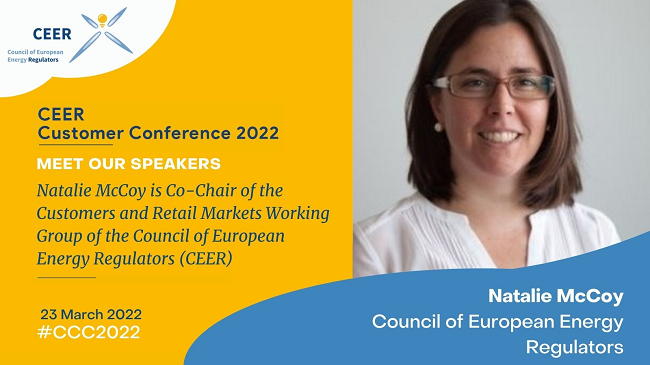 Ms McCoy joined Portugal’s Energy Services Regulatory Authority (ERSE) in 2016 to lead its international relations. Prior to ERSE, she served as Secretary General of the Council of European Energy Regulators (CEER) between 2011 and 2015.

In addition to her responsibilities at ERSE, Natalie co-chairs the CEER Customers and Retail Markets Working Group, following three years as vice chair. She also co-chairs the Agency for the Cooperation of Energy Regulators (ACER) Retail Working Group, established in 2021.

In parallel, she serves as co-chair of CEER’s Gas Decarbonisation Legislation Workstream, since September 2016. Natalie has more than fourteen years’ experience in energy regulation, focusing on customer rights, regulatory governance and electricity and gas market design. With an academic background in political science and EU affairs, she worked at the European Parliament prior to moving into energy regulation.